Bad news on the front page of the New York Times: Washington wants to label Iran's Revolutionary Guards "terrorist," signifying its determination to step up sanctions on Iran and to pressure other nations to do the same (Helene Cooper, "U.S. Weighing Terrorist Label for Iran Guards," 15 August 2007). Since Michael Slackman's departure from his Iran assignment, the New York Times' coverage of Iran's domestic affairs has deteriorated drastically, and the paper moreover regularly allows Washington to plant fake news, usually via Michael R. Gordon, supporting its barefaced lies that Tehran is attacking US troops through the Taliban, Iraqi Shi'i militias, and even Iraqi Sunni insurgents (when it's clear to every thinking person that Tehran's main goal is only to have governments in Iraq and Afghanistan that won't allow the Taliban, Sunni guerrillas and terrorists, or Americans to attack Iran and Iranians). But, for once, the New York Times does Iran a visual favor: at the top center of the front page of its national edition today, right next to Helene Cooper's article, is featured a large photo of Mahmoud Ahmadinejad and Hamid Karzai talking to each other, and they are pictured as if they were saying: "Did you hear the incredibly stupid shit that America just said?" 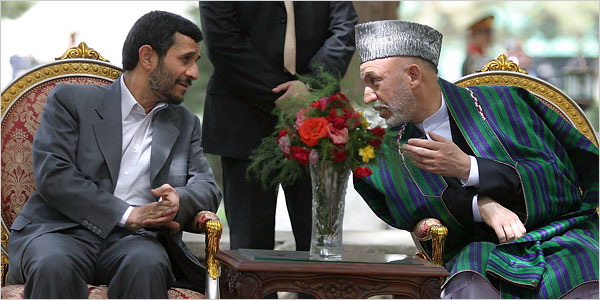