When America finds itself on the defensive on the PR front, it puts its talented -- and preferably Black -- tenth forward. During the Cold War, it sent its best jazz musicians -- Dizzy Gillespie, Louis Armstrong, Duke Ellington, and other geniuses -- on international tours, whose photographs are now on display in the exhibition titled "Jam Session: America's Jazz Ambassadors Embrace the World" at the Meridian International Center. 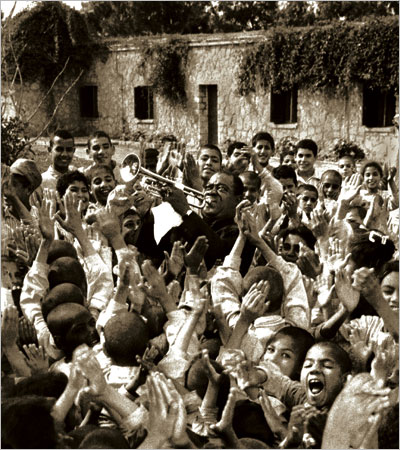 Reviewing the exhibition, Fred Kaplan reports that "Curtis Sandberg, the curator at Meridian International, said that during the three years it took to prepare the show his staff would frequently gaze at the photos and say, 'Why aren't we doing something like this now?'"1

But cultural power rises and falls with economic power, and American culture no longer enjoys the same edge -- the ability to combine innovation and mass appeal, drawing upon cultures of Blacks and immigrants, and market its products worldwide -- it did at the height of the Cold War.

Today jazz in America is for connoisseurs, not for masses. The largest film industry in the world is Bollywood, whose films, salacious and yet demure ("[f]ilmmakers in India are banned from glorifying drinking, drug abuse and smoking, or including scenes 'degrading or denigrating women in any manner'"), are "popular in regions where Hollywood has had only limited success, like the Middle East."2 Jackson Pollock's Abstract Expressionism could be plausibly promoted as "free enterprise painting" (in the worlds of then MOMA President Nelson Rockefeller) superior to Soviet socialist realism, but Jeff Koons and his ilk can only serve as a test of what the market bears. As for literature, even English professors would get stumped if they were asked to come up with the ten most influential American writers alive today in whom the rest of the world ought to take interest.

The only field of culture in which America truly eclipses all others may be the art of self fashioning. That's what Barack Obama is good at,3 and that's what he sells. So far, it's sold very well in America. Will the rest of the world buy it, though?

1 Fred Kaplan, "When Ambassadors Had Rhythm," New York Times, 29 June 2008. The historical facts in Kaplan's article are based on Penny M. Von Eschen's excellent research: Race against Empire: Black Americans and Anticolonialism, 1937–1957 (Cornell UP, 1997); and Satchmo Blows Up the World: Jazz Ambassadors Play the Cold War (Harvard UP, 2004). See, also, Frances Stonor Saunders, The Cultural Cold War: The CIA and the World of Arts and Letters (New Press, 2001).

3 Matt Taibbi on the art of being Obama:

Here's the thing about Obama, the reason they call him a "natural" and a "rare talent." When Hillary Clinton spouts a cliché, it's four words long, she's reading it off a teleprompter, and it hits the ear like the fat part of a wooden oar. Even when Hillary announced she was running for president, she sounded like she was ordering coffee. Obama on the other hand can close his eyes and the clichés just pour out of his mouth in huge polysyllabic paragraphs, like Rachmaninoff improvisations. In this sense he's exactly like Bill Clinton, who had the same gift. He is exactly what is meant by the term bullshit artist. ("Obama Is the Best BS Artist Since Bill Clinton," AlterNet, 14 February 2008)

The only field of culture in which America truly eclipses all others may be the art of self fashioning.

What about hiphop? The place/role of hiphop is (somewhat) similar to what jazz was then...although given the turn hiphop has taken it might just reaffrim your point above...

(anyway, not that I advocate or support this type of "nice face on imperialism" diplomacy at all...)