Iran's pill and condom policy is more progressive than the USA's and Japan's, as you can see from the BBC story below. The problem is that most leftists generally don't make much efforts to publicize stories like this about Iran, for they feel that they should talk only about human rights violations when it comes to the Islamic Republic. This makes for a strange reversal: the corporate media such as BBC and international financial institutions like the IMF and the World Bank are often more informative about Iran than leftist media.

Recent figures show that in little more than a decade, Iran has scored a stunning success in reducing its population growth rate, thanks to a vigorous state-supported family planning campaign.

It means that in the year 2006, the country's population is expected to be 37 million less than it would have been at the birth rates prevailing in the late 1980s, when the campaign began.

Many taboos have been broken along the way.

The Keyhan Bod plant is about two hours drive to the west of Tehran, and is the only state-supported condom factory in the Middle East. 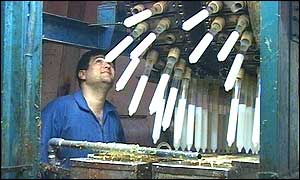 It produces about 45 million condoms a year, in 30 different shapes, colours and flavours.

"About 80% of our production is plain condoms destined for the Health Ministry," says general manager Kamran Hashemi. "The fancier ones go to the private sector. The favourite colour is pink, and for flavour, mint."

Most of the workers at the plant are women, wearing strict Islamic dress. If there was any embarrassment when they began work here, Zinat Rahmani, on the production line, says it's long since gone.

"Why should we feel embarrassed?" she asks. "The fact that we can stand on our own feet, and plan our own families and our society, is really good."

This openness means that anyone walking into an ordinary Iranian pharmacy may be greeted by a colourful display of condoms, many of them exotic foreign imports.

Contraceptive pills for women are also on sale. No questions are asked.

These and other contraceptive methods -- along with advice -- are also dispensed, free, at government primary health centres all around the country.

Other methods are also available without payment.

The Shahid Jaafari no-scalpel vasectomy clinic in Tehran has so far performed nearly 30,000 operations on men who feel they have already had enough children.

It also trains doctors to carry out similar operations in other parts of the country.

"It's getting more popular now, being more accepted among the men," says Dr Ali Rasekhi, as he stitches one of his clients.

Iran is believed to be the only country in the world where engaged couples cannot get a marriage licence unless they show that they have attended contraception classes. 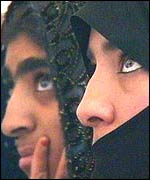 have a look at Ahmadinejad's recent address to the Non Aligned Movement's ministerial conference in Teheran, I've posted the full translated text here

Thank you for the link, Altaf! I had intended to comment on the subject of Iran and the NAM, of critical importance to checking US hegemony, but I haven't got around to it yet.

Did you also know that Homosexuals are given facilities to undergo sex change?

Yes, I wrote a little about sex change in Iran on this blog: "Changing Sex, Changing Islam" (3 August 2004).

I am a researcher working on a documentary tv series in Canada on Religion & Sexuality. I would like to speak to Yoshi about his article on contraceptives in Iran. Could he contact me at eli54@sympatico.ca? Thank you.