"Among the 350,000 to 400,000 who were attacked by the atom bomb and/or exposed to the lethal post-explosion radiation, at least 50,000 were people from the Korean peninsula who had been forcibly sent to Japan as mobilized workers and soldiers, or who had left their villages following the devastation of Japan's colonial takeover of Korea in 1910. . . . Until 1990, the speeches of political elites at the annual municipal Peace Memorial Ceremony on August 6th never referred to the at least 20,000 to 30,000 Korean atom bomb victims, who comprised between ten and twenty percent of the total population estimated to have been immediately killed by the bombing" (emphasis added, Lisa Yoneyama, "Memory Matters: Hiroshima’s Korean Atom Bomb Memorial and the Politics of Ethnicity," Public Culture 7.3, Spring 1995, p. 502). 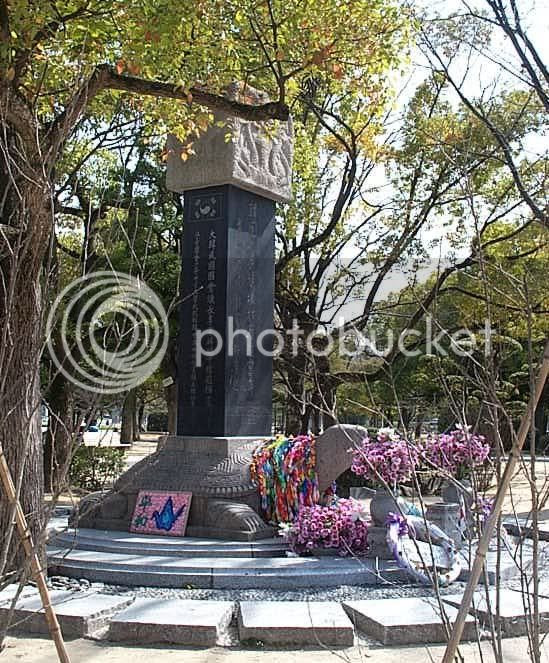 The Kankokujin Genbaku Giseisha Irei Hi [Korean Atom Bomb Victims' Memorial], pictured above, was erected by the Hiroshima branch of the Korean Residents Union [Zainippon Taikan Minkoku Kyoryumindan -- Mindan, for short] in Japan on April 10, 1970, but it was only in 1999 that the Hiroshima city government allowed zainichi [resident] Koreans to relocate the memorial inside the Hiroshima Peace Park. Till then, the memorial had stood "northwest of Hiroshima's Peace Memorial Park, across the river which demarcates the Park's western boundary," "at the foot of a bridge on a 150-square-foot corner lot, at a narrow four-way intersection" (Yoneyama, p. 505). Oh Tokai, a working-class zainichi poet, observed: "The fact that the memorial for the Korean atomic bomb victims stands across the river is suggestive. It expresses the reality of zainichi" (qtd. in Yoneyama, p. 511).

The Korean Atom Bomb Victims' Memorial has been marked not only by the struggle over memory of Hiroshima between zainichi Koreans and Japanese government officials; it also bears an inscription of the relation of power between zainichi Koreans who identify with opposite sides of the divided Korea: "On the front of the memorial is an engraving of Chinese characters which reads, 'kankokujin genbaku giseisha irei hi' or 'memorial for kankokujin . . . atom bomb victims.' Next to it is another line, also of Chinese characters but in a different style of calligraphy, which reads, 'In memory of prince Yi Gu and the other 20,000 or more souls'" (Yoneyama, p. 505). The word kankokujin is commonly used in Japan to specifically refer to nationals of the Republic of Korea. Zainichi Koreans who are politically affiliated with the Democratic People's Republic of Korea are, in contrast, described as chosenjin, which is also the term used to denote all Koreans regardless of citizenship. Moreover, Prince Yi Gu was serving as a Lieutenant-Colonel in the Japanese Imperial Army when he was killed by the bomb -- i.e., a collaborator (Yoneyama, pp. 508-509). In other words, the inscriptions on the memorial marginalize zainichi Koreans who politically identify with North Korea in particular, and class-conscious zainichi Koreans in general. Oh puts it this way: "[W[hy does only the prince receive special treatment when tens of thousands of other Koreans also died? . . . What does the memorial exist for? That there is only an inscription for the Republic of Korea's national flag [when in fact there are two separate sovereign nations for the Korean people] should also be a matter of controversy" (qtd. in Yoneyama, p. 511).

As Seoul and Pyongyang have gradually opened up channels of political communication and economic cooperation, however, the division in the zainichi community has also slowly diminished. In 2001, the pro-Seoul Mindan and the pro-Pyongyang Soren (Zainichi Chosenjin Sorengokai, the General Association of Korean Residents in Japan -- Chongryun in Korean) reached an agreement to build a new unified monument for all Korean victims of the atomic bombing.

Nevertheless, North Korean hibakusha have yet to receive any compensation from the Japanese and U.S. governments:

They endured the atomic nightmares of Hiroshima and Nagasaki and then struggled for decades to live in one of the world's most impoverished, isolated countries. The atomic bomb survivors living in North Korea share yet one more unhappy distinction: they are the only victims of the U.S. nuclear attacks on Japan who receive no assistance from the Japanese government.

The plight of these forgotten victims is getting more attention this year as Japan marks the 59th anniversaries of the destruction of Hiroshima on Friday and Nagasaki on Monday.

Little is known about bomb survivors in North Korea, many of whom were repatriated to their homeland in the late 1950s. The Japanese government estimates there are about 930 of them, but support groups say the real number is twice that, 1,953.

Even less is known about their health or their access to treatment. Bomb survivors -- numbering 285,600, including 5,000 living abroad -- can develop myriad radiation-related maladies, including cancer and liver troubles.

The North Koreans were brought by the hundreds of thousands to Japan as soldiers and laborers during Tokyo's harsh 1910-1945 colonization of the Korean Peninsula.

The North Korean survivors are largely victims of politics.

Tokyo has long resisted providing full assistance to survivors who don't live in Japan, but a 2002 court ruling forced the government to funnel more relief to victims abroad.

The government provides monthly allowances of up to $1,260 and free medical checkups to survivors in Japan. Foreign-based survivors, mostly in South Korea but also in many other countries, get a smaller package of assistance.

Since 2002, the monthly allowances have been available to all survivors as long as they had special certificates available only in Japan.

Government officials say they do not know of any North Koreans who registered before leaving Japan. Under the strict communist regime in Pyongyang, citizens are not free to travel to Japan to register now.

Even with registration, officials in Tokyo say they are loathe to send them benefits in North Korea because they have no idea whether the money would be confiscated by the revenue-starved government.

Japan and North Korea have never had diplomatic relations, and the situation of the bomb victims is unlikely to change while the two countries remain estranged, government officials acknowledge.

"Realistically, there is little we can do until the diplomatic ties are normalized," said Takaaiki Kikuta, a Health Ministry official in charge of atomic bombing survivors.

"Among many uncertainties, we are not familiar with North Korea's financial system, or whether the aid money would safely reach the survivors if we sent it," he added.

Supporters, however, say that a special effort should be made for the North Koreans.

"All these years, the Japanese government has abandoned survivors in North Korea," said Lee Sil Gun, a 75-year-old pro-Pyongyang resident in Japan and himself a Hiroshima survivor.

Lee was in Japan's western port city of Kobe selling black market rice the day the bomb exploded over Hiroshima, and he was exposed to radiation when he returned home the following day. He now suffers from liver ailments.

Many of his Korean friends and neighbors who survived the bombing later moved to North Korea in a state-sponsored repatriation program beginning 1959.

Lee, who interviewed about a dozen survivors during a visit to Pyongyang two years ago, said many North Korean survivors are getting old, frail and in dire need for help as soon as possible.

Let us make a point of remembering the forgotten victims, as we commemorate the bombing of Hiroshima today.
Posted by Yoshie at 3:59 PM

i hope to all the people had it will die in peace.because my sister sadako,died because of luekimia and her friend kimaji

CUNNING JAPANESE ALWAYS SHOWS THAT JAPAN HAS GOTTEN A LOT OF DAMAGES BY ATOMIC BOMB...BLAH BLAH... ABOUT 20% OF KOREAN VICTIMS WHO WERE FORCIBLY TAKEN TO JAPAN COULDNT GET ANY REWARDS FROM JAPANESE GOVERNMENT.

people shouldn't give the japanese government so much shit about the money, after all, they got fucking bombed. why no allies reparations? (i don't actually feel this way, im being devil's advocate)

Do you think the addition of the memorial for Korean Atom Bomb Victims shifts the collective cultural memory of Japan that was originally constructed by the Hiroshima Peace Memorial Park as an asymmetrical representation of the victimization of hibakusha?