Wal-Mart's dedication to "low, low wages" is a satirist's dream. The Onion zeroes in on it in "Wal-Mart Announces Massive Rollback on Employee Wages" (December 8, 2004): 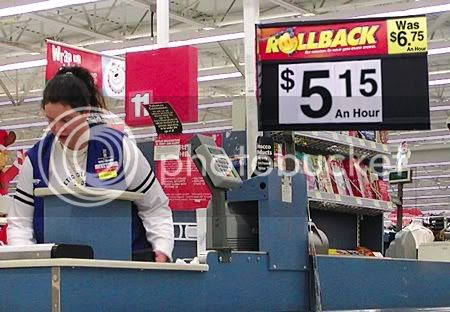 Above: A sign announces a Louisville, KY Wal-Mart's low, low wage for cashiers.
The Onion can take on "the $259 billion retail behemoth" (Liza Featherstone, "Will Labor Take the Wal-Mart Challenge?" The Nation, June 28, 2004) satirically, but can American trade unions organize it, whose managers are directed by Bentonville to make "a full-time commitment" to "staying union-free" ("Labor Relations and You at the Wal-Mart Distribution Center #6022," September 1991, p. 7)?

Wal-Mart has been reined in by the labor movement abroad: "in Germany, . . . many Wal-Mart workers are unionized and the company abides by a sectorwide agreement with a large retail union, and has been the target of pickets and warning strikes. . . . In Brazil Wal-Mart has had to reach agreement with unions on some workers' rights issues, while in Japan all of the company's workers are unionized, and Wal-Mart abides by an agreement reached with the stores' previous owner" (Featherstone, June 28, 2004). To the surprise of many, even Chinese workers (whose "right to strike was removed from China's constitution in 1982" [John Pomfret, "Labor Unrest in China Reflects Increasing Disenchantment," The Guardian Weekly, May 4, 2000, p.37]) recently saw Wal-Mart reluctantly agree to allow the All China Federation of Trade Unions to unionize Wal-Mart workers. The Chinese Communist Party and its unions, fearful of the political fallouts of naked capitalism ("[S]ome action by Beijing is crucial. Workers are increasingly taking to the streets. The number of protests reached 300,000 in 2003, estimates [Robin] Munro [research director at China Labor Bulletin]. This year more than 500 workers in Dongguan damaged facilities and injured a manager at a big Taiwanese shoemaker" [Dexter Roberts, "China: A Workers' State Helping The Workers?" BusinessWeek, December 13, 2004]), are at least willing to make a show of standing up for workers' rights.

Will organized labor in the United States? So far, the United Food and Commercial Workers has spent little: "the UFCW devotes only 2 percent of its national budget to the Wal-Mart campaign" (Featherstone, June 28, 2004); and the UFCW has won nothing: "In the United States, only one group of Wal-Mart employees has successfully organized. In February 2000 ten meatcutters in Jacksonville, Texas, voted 7 to 3 to unionize their tiny bargaining unit. Two weeks later, Wal-Mart abruptly eliminated their jobs by switching to prepackaged meat and assigning the butchers to other departments, effectively abolishing the only union shop on its North American premises" (Featherstone, June 28, 2004).

Andy Stern, president of the Service Employees International Union, wants to change that. Stern recently gave the AFL-CIO an ultimatum: adopt the changes he proposes, or the SEIU will pull out of the federation. Among the changes he demanded in his ten-point program, "he called for the AFL-CIO to return half of all dues to unions to fund aggressive organizing drives. And he said the federation should set aside about $25 million -- out of its $118-million annual budget -- for an effort to organize Wal-Mart Stores Inc. " (Nancy Cleeland, "The Service Employees International President Threatens to Leave the Umbrella Federation," Los Angeles Times, November 11, 2004). Whatever you think of the rest of Stern's program, you would have to agree that spending more on organizing is the way to go.

The question is how the money will be spent, however. Peter Olney argued that union organizing should focus on "the most strategic sectors of the economy that are crucial to labor’s overall power and place in society," one of which is the "logistics (transport and storage)" sector ("The Arithmetic of Decline and Some Proposals for Renewal," New Labor Forum, Spring/Summer 2002 ). Why logistics? First of all, it is impossible for capital to offshore the jobs of transport and warehouse workers. Furthermore, corporations' obsession with "just-in-time" inventory control makes them vulnerable to supply disruptions.

Efficient supply chain management is the key to the profitability of Wal-Mart, which pioneered "just-in-time" inventory in the retail industry: "The 'Wal-Mart model' is the leading retail strategy (perhaps the leading business strategy in any sector) to emerge since the 1970s. This model features a super-efficient production process in which each operation -- buying products from manufacturers, distributing them to the retail stores, and selling them to customers -- is linked to the next in a continuous 'just-in-time' chain" (Annete Bernhardt, "The Wal-Mart Trap," Dollars & Sense 231, September-October 2000). Wal-Mart's zeal to "hold the lowest feasible [inventory] level while avoiding the risks of 'stock outs'" (Bahar Barami, "Productivity Gains from Pull Logistics: Tradeoffs of Internal and External Costs," Paper presented at the Transportation Research Board Conference on Transportation and Economic Development, September 23-25, 2001), its competitive advantage, is also the weak link in its anti-union empire.

According to the Teamsters, Wal-Mart had 78 distribution centers that employed approximately 25,000 workers by the end of 2001 ("Wal-Mart: Driving Down Standards in the Food Industry," July 11, 2000) -- about 3% of the total Wal-Mart employees in the United States at that time. By now, it has more than 100 distribution centers, but the ratio of Wal-Mart distribution center workers to Wal-Mart store and office clerks is likely to have remained roughly the same (and it will decline further soon, upon the introduction of radio-frequency identification). It makes sense to concentrate on organizing distribution center workers, who represent a small proportion of the total Wal-Mart workforce and yet control the strategic points of the Wal-Mart supply chain, as several labor writers suggested (for instance, Marc Brazeau, "What Would a Successful Recognition Campaign for Wal-Mart Workers Look Like?" The Joe Hill Dispatch, April 30, 2004; and David Moberg, "The Wal-Mart Effect: The Hows and Whys of Beating the Bentonville Behemoth," In These Times, June 10, 2004). What if the unions spent $25 million salting the distribution centers? "Training and hiring new professional organizers, Olney argues, is not as important as encouraging potential organizers to take jobs themselves, in target workplaces. This 'salting' -- taking a job with the intent to organize -- was one factor in the massive drives of the 1930s," says Jane Slaughter ("Organizing for Numbers -- Or for Power?" Labor Notes, October 2002).

Distribution centers are good targets from the point of view of using public subsidies already lavished upon them for an argument for working-class community control. Philip Mattera and Anna Purinton found that "90 percent of the company’s distribution centers have been subsidized" and that Wal-Mart has received an average of about $6.9 million per subsidized distribution center, far more than $2.8 million that it captured per its subsidized store ("Shopping for Subsidies: How Wal-Mart Uses Taxpayer Money to Finance Its Never-Ending Growth," May 2004). A Wal-Mart distribution center generally employs "660 to 800 employees" (Mary Hopkin, "Grandview Official Wants Grant Put on Hold," Tri-City Herald, December 20, 2002). That's $8,600-10,000 per job in direct subsidies alone, not counting the costs of "food stamps, Medicaid, the earned income tax credit and other social safety-net programs that Wal-Mart retail workers (and their families) may be eligible for because of the low wages and limited health insurance coverage they receive": "A state survey [in Georgia] found that 10,261 of the 166,000 participants in the PeachCare program, which provides health care coverage for youngsters in low-income uninsured families, were children of Wal-Mart employees. This was more than 10 times the number for any other employer" (Mattera and Purinton, May 2004). 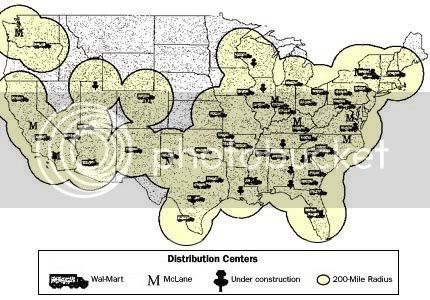 Source: Teamsters, "Wal-Mart Organizing Update," Warehouse Newsletter, (August 2000)
Many of them are in the South, especially outside metropolitan areas, where unions have had little success organizing. Wal-Mart's aggressive expansion, however, has brought it into the traditional strongholds of organized labor in the East, the West, and the Midwest, laying the ground for a coordinated national campaign.

Then, there are choke points at ports. Chris Kutalik's article on the "[w]ildcat strikes, rallies, and highway blockades by port truck drivers [that] rocked West and East Coast ports in late April and early May" demonstrates their potential power to impact the bottom lines of many bosses, "from ship owners to port authorities to retailers like Wal-Mart":

Wildcat strikes, rallies, and highway blockades by port truck drivers rocked West and East Coast ports in late April and early May. Angered by rising diesel fuel prices and other factors that keep them at or under the poverty line, hundreds of mostly African-American and Latino owner-operators (sometimes called troqueros) parked their trucks and blocked terminals. . . .

The troqueros' unique position in the transportation system enabled them to shut down freight traffic and force powerful interests, from ship owners to port authorities to retailers like Wal-Mart, to listen to their demands.

Troqueros move freight between ports and inter-modal terminals, the sites where truck cargoes are loaded onto rail cars or unloaded from them. All freight that enters the country must pass through a troquero's hands before being loaded onto other trucks or onto trains for its journey to warehouses, stores, and factories around the country.

The issues that drove the port truckers to their direct actions -- "a 30 percent rise in freight rates paid by trucking companies," "fuel surcharge increases of 5 percent, plus 5 percent for each $.25 a gallon when diesel fuel tops $1.95 a gallon," "[r]ecognition of the drivers as workers" rather than "independent contractors" were their demands (Kutalik, June 2004) -- remain unresolved, providing opportunities for joint actions between them and Wal-Mart distribution workers, attacking Wal-Mart's supply chain simultaneously.
Posted by Yoshie at 8:20 PM

Email ThisBlogThis!Share to TwitterShare to FacebookShare to Pinterest
Labels: Class

Good post, Yoshie; do you know approximately how many direct employees Wal-Mart has? I've heard 725,000, which doesn't sound right (from Wal-Mart itself). Oh, and thanks for *not* providing a link to the loathesome Robin Munro. People like that exist not to improve workers' lives, but, rather, to excite popular indignation and hostility among middle strata against 'Communism'

It is time to turn patriotism agains Walmart. Walmart's products are from 70-80% Chinese. Walmart is as anti-American as Al Qaeda! Informational picketing should begin at every Walmart store now, during the Christmas frenzy.

Excellent piece. Justi-in-time production and delivery have created these beautiful chokepoints in U.S capitalism's distribution system--the beauty being that they serve as "force multipliers" that greatly ampfly the shopfloor power of workers at these points. I'm just not convinced that as weak as the U.S. labor movement has become that it has any other way of making a dent on an employer like Wal-Mart.

Another example beyond the troqueros was this tiny strike last summer of 60 tugboat operators in Hawaii that virtually shutdown all incoming cargo into the islands for days.

As the old anthem goes "without our brain and muscle not a single wheel can turn."

Question: Are there currently any campaigns to 'salt' distribution centers in the Twin Cities, MN? If so, can you tell me how to get in contact with them?

Anonymous said...
This comment has been removed by a blog administrator.
8:56 PM

Contact Labor Notes' Chris Kutalik at chris@labornotes.org. If any young rank-and-file activists are salting in Twin Cities, he should know and be able to get you in touch with them.

P.S. I removed one of your comments, as they were duplicates.

WalMart is also China's 3rd best customer and as such, is putting a lot of suppliers out of business, requiring of them that they supply lower-priced goods than it costs them to manufacture anywhere other than China.

Lou Dobbs is doing a series this week called "Red Star Rising" on just this problem that WalMart has let into our back door, and speculates that this influx of investment will also cause China to surpass the U.S. militarily.

What bothers me most is that both Republicans and Democrats (including Kerry and Edwards) voted all gung-ho for unconditional trade with China. A pox on both political parties. We can no longer afford the duopoly--it's clear that they both sell us up the river.

wonderful roundup! dreamy me got snagged by the hi-tek, dust sized, inventory chips. are we closer to a day of transparency in terms of a total global inventory? imagine a wal-mart infrastructure democratized through transparent inventory flows? Edward Bellamy lives! or stop fighting China and start fighting for transparent commerce...